We produced construction site structures for the gold mine operation in Greenland, the largest island in the world, completely covered with glaciers in the north of the Atlantic Ocean. The prominent feature of the construction site project, in which the new generation container model is used, is that it will be used in Greenland's first gold mine. As it will be remembered, as a result of mineral exploration activities in the South Greenland region, a gold mine was discovered for the first time in the island at the beginning of 2012. In the studies carried out, a wide golden belt was reached within the mountain ruins covering an area of ​​90 km from the southern discovery point to the north.

Among the Karmod new generation container structures put into use at the Greenland mining site, there are units such as management offices, dormitory and dining hall buildings, and laboratories. Greenland's average temperature of -7 ⁰C was also taken into account in the production of container construction site structures. In production, extra insulation applications were carried out, taking into account the conditions of use in the field below the freezing level. With this special application advantage, the air-conditioning of the construction site container structures can be done easily. Karmod new generation container has completely sandwich panel system from wall to roof. With its advantage, this system can be used safely even in the harshest climates. During the assembly stage, special wicks are applied to the junction points of the sandwich panels to the specially painted metal chassis, preventing air circulation completely. Special doors and double heat pine windows completely close the building to air passage. The special clamping system applied in the roof sandwich panel joints completely prevents the roof water ingress and provides full impermeability to the structure.

The average temperature of Greenland is -7 ⁰C, but the climate is dry and sunny. Winters are extremely cold. Even in the summer, the temperature in the ice-covered regions is at freezing point.

Karmod new generation container construction sites will serve for many years in the gold mine extraction field. It will always offer warm environments on the construction site with its construction safety, performance against tough field conditions and insulation advantages.

Gold Mine Office and Labor Camp

Region to be used 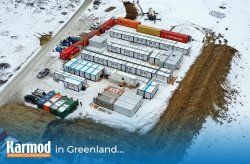